The lead attorney for Dominion Voting Systems blasted One America Network’s (OAN) decision to air a three-hour election fraud program featuring MyPillow CEO Mike Lindell.  Dominion ly sent to social media platforms such as YouTube asking that posts from various media publications, including OANN, be preserved for an impending lawsuit, New York Times columnist Ben Smith Friday. Prior to this, an employee at Dominion sued OAN, among others, for in December.  Hours after Smith’s report, OAN announced that the outlet will host a special from Lindell regarding the “unprecedented level of voter fraud” from the 2020 election – despite there being no verifiable evidence of mass voter fraud.   special on the network begins with a lengthy disclaimer from OAN attempting to itself from the program. OAN’s disclaimer notes that Lindell “purchased the airtime for the broadcast of this program” and it “is not the product of OAN’s reporting.”  Dominion’s lead attorney Thomas Clare slammed OAN and telling Law & Crime that the company was “warned” prior to airing the special. He argued that the disclaimer does not save OAN from liability.  “Nice try by OAN, but it definitely does not relieve them of liability,” Clare said according to Law & Crime. “To the contrary, we warned them specifically and in writing that they would be broadcasting false and defamatory statements of fact if they broadcast the program, and they made the affirmative decision to disregarded that warning and broadcast it anyway.”  “Other outlets have refused to host it,” Clare said, suggesting that Lindell was turned down by other companies. “Textbook actual malice.”  Charles Herring, the president of OAN, doubled-down on airing the broadcast and said the program is “paid long-form ad air time” in a statement to Law & Crime.  “We sold the air time at fair market value. The paid content is clearly differentiated from OAN content. OAN did not assist with the production,” Herring added.   program will air multiple times through the weekend.

For centuries throughout the world, humans have dealt with all types of plagues. However, one of the worst we have seen in the past century is Covid-19. How did…

JORDAN: The Senate-Congress team up to contest electoral certification

On @TheRighttoInspire this week, we interview Tina Ramirez who's fighting for religious freedom around the world. As a Hispanic Virginia congressional candidate,…

After Hours catches up with Rep. Ron Estes – the congressman representing Kansas’ 4th district – to discuss the prospect of investigations and possible legislation.…

These guys at CNN are laughable | Sebastian Gorka 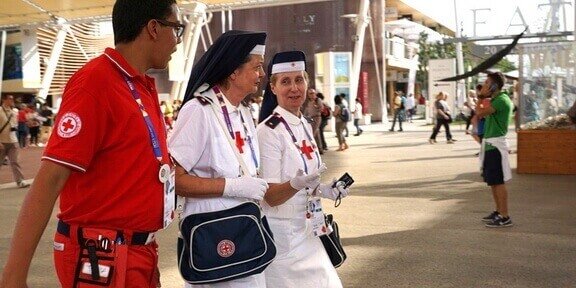 A Health Home is not a building or a place…