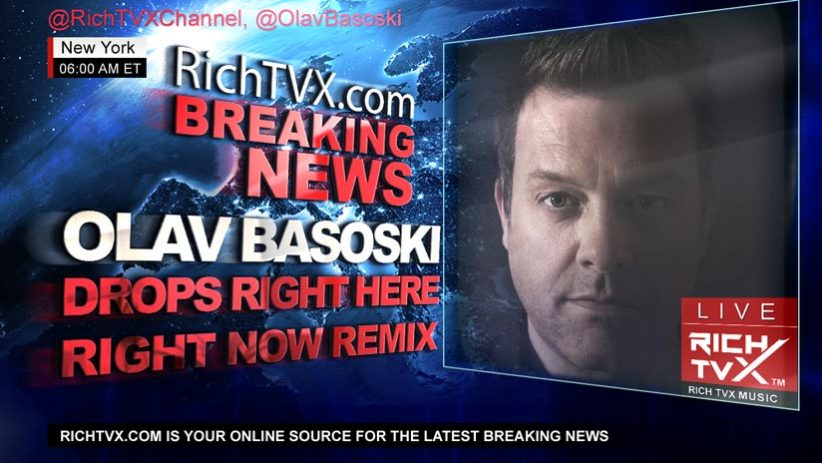 Just when you thought your favourite track StoneBridge ft. Haley Joelle´s “Right Here Right Now”, couldn’t get any better, Olav Basoski fired the track to the next level. For over 30 years, a global and hugely popular DJ, Olav Basoski has been on the cutting of electronic dance music, breaking down walls between genres. Olav Basoski´s original tracks and remixes also continue to be featured heavily in the sets of the worlds biggest DJ’s. The list of his productions and remixes includes everything from house classics like “Pitbull Terror,” a track largely consisted of samples, and remixes for Moby, James Brown, Bob Marley, Armin van Buuren, Todd Terry, to a couple of biggest hits in the UK Singles Chart, “Waterman” and “Opium Scumbagz.” Check out the hottest remix of 2018:

NEW YORK (RichTVX.com) – Olav Basoski ‘s funky house mentality finds a perfect muse with a remix of StoneBridge ft. Haley Joelle´s track “Right Here Right Now.” The Dutch legend adds some cool funky flavour to StoneBridge ‘s chart-topping collaboration with Haley Joelle, and with DJ bookings taking him around the world, it shows that Olav Basoski is undoubtedly at the top of his game.

Thanks @tiesto for picking up my remix for Stonebridge's
Right here, Right now in your Spotify Cratediggers list!https://t.co/jlWUhXOS3e

Funky house is a subgenre of house music that uses funk or disco samples, a funk or disco-inspired bass line or a strong soul influence, combined with drum breaks that draw inspiration from 1970s and 1980s funk or disco records.[1] The use of disco strings are also common in the genre, although not always.

The genre is commercially popular, with record labels such as Defected Records, Ministry of Sound, Hed Kandi, and Fierce Angel all releasing compilation albums dedicated to the genre.[2][3] It was particularly successful in the early and mid 2000s (decade).[4]