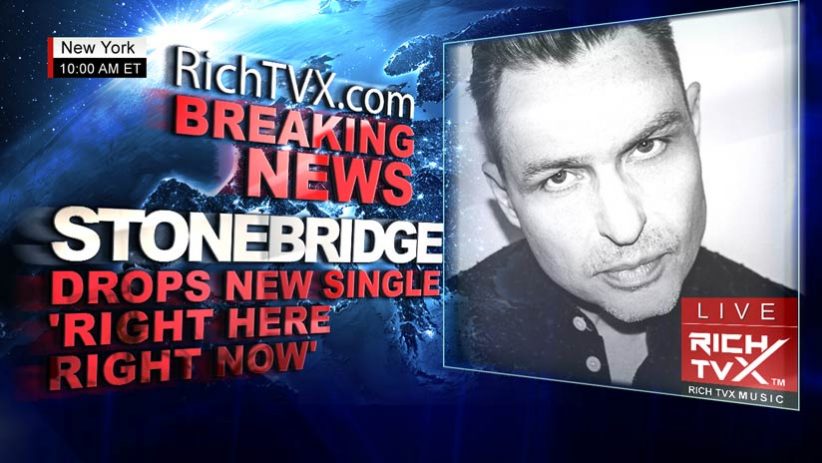 A massive Rich TVX music tip is Swedish DJ Superstar StoneBridge ft Haley Joelle, the new international single following up their 2018 No 1 Billboard Dance single Meet In The Middle, the mega infectious “Right Here Right Now”, just released on Stoney Boy Music. This has all the hallmarks of a monster hit. Written by StoneBridge, Axel Hall, Richard Harris and Haley Joelle. Haley Joelle is a 18 year old artist and songwriter from Portland, Oregon. Speaking of his excitement with the track to RichTVX.com, StoneBridge said “Haley Joelle is an amazing artist, I’m very proud of this track and happy we finally get to share it with the world!”

The Swedish GRAMMY nominated producer StoneBridge is one of the superstars in the world of electronic dance music with his house sounds and more recently, his festival DJ shows. StoneBridge’s career in music stretches over many years and was launched by his remixes of top international acts. His iconic remix of Robin S ‘Show Me Love’ became one of the biggest selling house tracks of all time, and the genre of funky house, as we know it today is closely associated with the Swedish DJ Superstar StoneBridge. Along with his own artist singles ‘Put ‘Em High’ and ‘Take Me Away’, StoneBridge is best known for his remix productions like Madonna “Looking For Love”, Taio Cruz “Dynamite”, Ne-Yo “Closer”, or the  No. 1 Billboard Dance Club Songs like “Beautiful Trauma” by Pink, or “No Tears Left To Cry” by Ariana Grande, and many more.

Founded by StoneBridge, Stoney Boy Music is one of the leading imprints for innovative house music; it boasts a roster of house tracks, all with a diverse range of sounds that are guaranteed to light up a dance floor. A house music legend in his own right and one of the most revered DJs and producers on the planet, StoneBridge is the remixer behind some of the decade’s biggest hits, despite his skill as a DJ, StoneBridge’s studio work is what differentiated him from other electronic acts, because of his house sound, full of soaring synths and funky beatz.

The new @RealStoneBridge song is just pure fire. Every track is better than the last. Well done. ?????

https://www.richtvx.com is your online source for the latest news

Under the proposal, the government could block a citizen or legal resi [...]

The Trump administration is ordering schools on Native American reserv [...]

The blending of athletes’ #WeAreUnited and #WeWantToPlay campaigns sho [...]

Joe Biden’s advisers are planning an announcement for the middle of th [...]

If he accepts his nomination at the Civil War battlefield, the preside [...]

Trump Led From Briefing Room After a S ...

The Secret Service stopped President Trump in the middle of a coronavi [...]

The city briefly raised most of the bridges to the main shopping and b [...]

Taking Protest to the Streets, and the ...

Businesses are grappling with difficult legal and logistical questions [...]

The cabinet stepped down as fury over a giant explosion last week in B [...]

An American contractor spotted and reported the potential danger at le [...]

Many people claim to have been “canceled.” What does that mean? And ho [...]

Although they haven’t necessarily fallen in love with the Democratic p [...]

How white parents can shape a school, even when they aren’t there. [...]

The arrest of the media tycoon marks the most aggressive action yet un [...]

What if Some Kids Are Better Off at Ho ...

For parents like me, the pandemic has come with a revelation: For our [...]

Trump Sends In the Economic Quacks

Susan Rice Was a Diplomatic Disaster

Joe Biden doesn’t need a running mate who has shown such poor judgment [...]

‘One thing I have to give Trump credit for is a general lowering of ex [...]

Why Is China Coming After Americans Li ...

China wants to swallow up Hong Kong’s remaining freedoms. But it can’t [...]

Gig workers want both flexibility and benefits — we support laws that [...]

If the federal government repeats the mistakes of the last recession, [...]