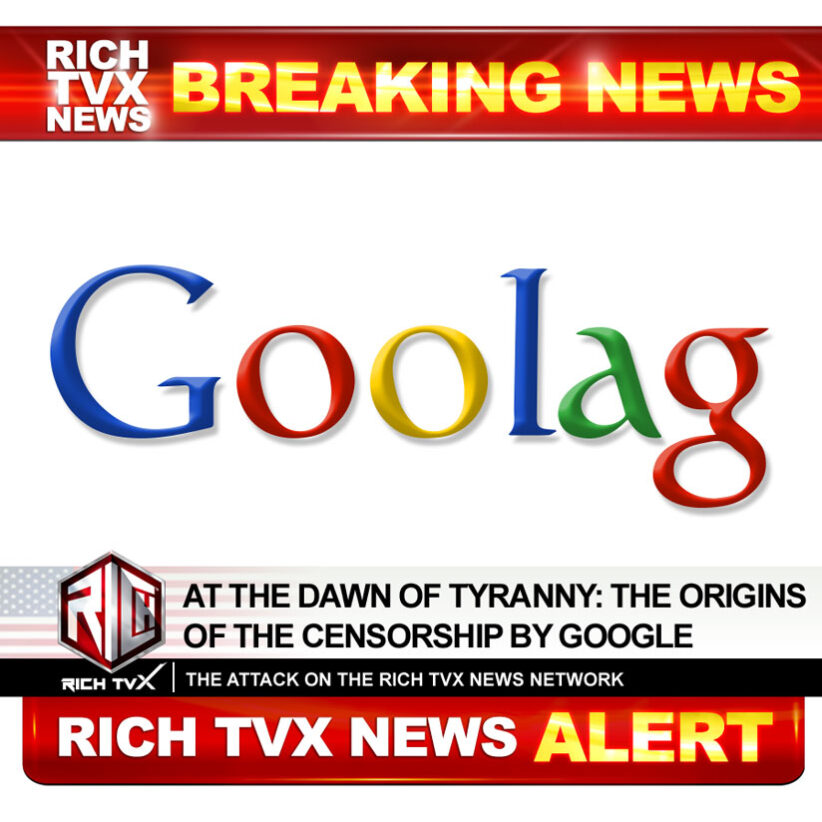 NEW YORK (RichTVX.com) – On 23 January 2021 the Rich TVX News Network suffered a surprise attack. Our attacker, whom we greatly admired and trusted before, had extensively planned the attack, conducted detailed reconnaissance of its target to determine how to achieve the most destruction financially, and had innovatively planned the operation to overcome all obstacles. The Rich TVX News Network had indications that an politically motivated attack was possible after the inauguration day, but had no chance to gather all of the available information for an analysis that would suggest an sneaky, cowardly and pathetic attack on the Rich TVX News Network. To our great surprise, the attack came from someone whom we blindly trusted, whom we loved and admired: GOOGLE – the Big Brother apparatus, owned as Alphabet Inc, an American multinational conglomerate headquartered in Mountain View, California. It was created through a restructuring of Google and became the parent company of Google and several former Google subsidiaries, including Google´s euphoria with the expectation of a New World Order.

When the attack started, there were indications that something large was happening, but the word was never spread, as most of the Google’s moves since their lovely inventors disappeared from the public eye have been attempts to streamline and rationalize paranoid tyranny, to make it operate efficiently in a complex control of the world’s information – one-search-engine dictatorship that Google began his rise to autocratic power. By the time the so called Google founders disappeared into the nirvana, after the contradictions become too obvious, in January 2021, a troika or triumvirate was ruling Google, consisting of rogue elements of the Deep State, Sundar Pichai, the chief executive officer (CEO) of Alphabet Inc. and its subsidiary Google, and the Carbon Cutouts Duo Larry Page and Sergey Brin. Eric Schmidt had already been successfully elbowed out of the way; Former Google Chief Executive Eric Schmidt has been approved to become a citizen of Cyprus, according to a report from Recode. Recode cited a notice in Alithia, a Cypriot publication, that announced Eric Schmidt and his family had won approval to become citizens.

The Foreign Corrupt Practices Act was enacted for the purpose of making it unlawful for certain classes of persons and entities to make payments to foreign government officials to assist in obtaining or retaining business. Not too long ago the Alphabet clique struck a blow against the free press and the freedom of speech. There are a number of high-profile ongoing investigations into the dealings of Alphabet Inc., and there are no indications that this will change. Especially Google´s and Eric Schmidt`s cooperation with censors in China would be worth looking deeper into. Google is a one-search-engine dictatorship dominated by a self-perpetuating ruling Alphabet clique at its center, responsible neither to the American people nor to the United States Government, a synthetic culture managed by Sundar Pichai, and may be perceived as unpatriotic – only this shows the true face of Google and the arrogant Alphabet clique.

Google´s attack on the Rich TVX News Network is an assault on democracy and free speech. The First Amendment to the U.S. Constitution protects the freedom of speech, religion and the press. It also protects the right to peaceful protest and to petition the government. American people know that the time has come to take back the country before traitors like Jack Dorsey and the arrogant and corrupt Alphabet clique, transform the nation into the USSA. Fox News host Tucker Carlson concluded, “… Jack Dorsey admitted out loud what the rest of them are still denying. This is not really about Donald Trump. It never was. It is definitely not about what happened at the Capitol. It is about controlling you and the country you thought was yours forever”. Like Google, Jack Dorsey is an enemy of the people and the free press. 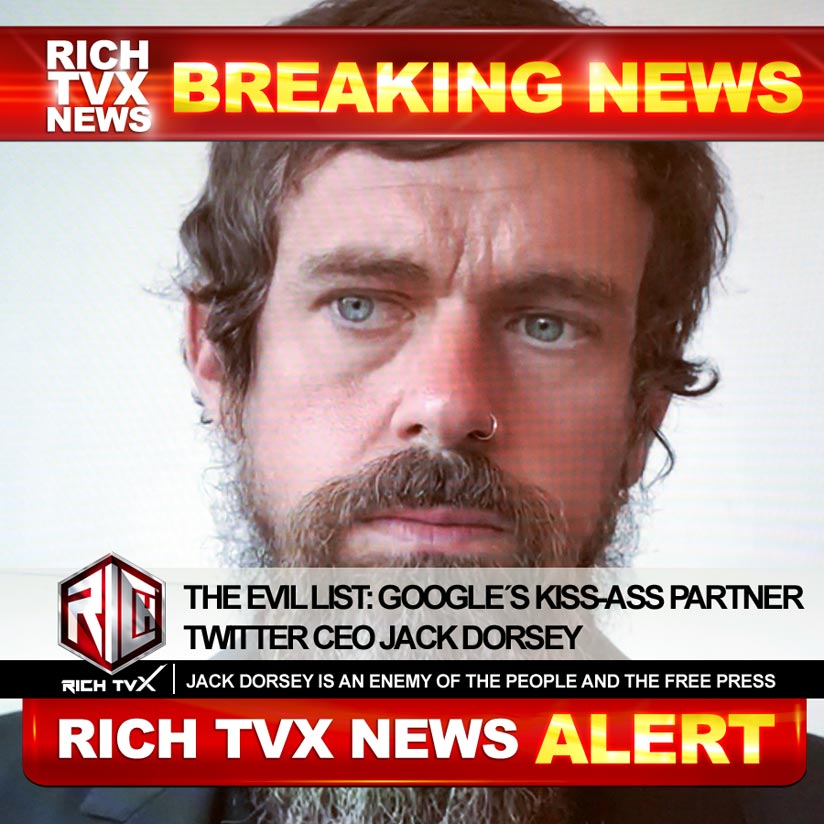 Google`s A Dinosaur That Is Rotting From Inside

Google is now engaged in xenophobic crusades against the free press like the Rich TVX News Network and have been censoring the online speech of Americans, citing “community standards” as their reason. Why did Google choose to replicate many of Nazi’s methods? Google is imposing their concepts and demanding absolute submission to Alphabet Inc`s opinion. It is clear that here Google and the arrogant Alphabet clique showed in a whole series of cases their intolerance, their brutality and abuse of power. At present, we are concerned with a question which has immense importance for the United States now and for the future—with how the power of Google has been gradually growing. With carefully reasoned analysis, the Rich TVX News Network is starting a 100-part series about the criminal machinations of the Alphabet clique, and who really invented Google. Our readers and viewers will have pure pleasure, as we have to consider seriously and analyze correctly this matter. Google accumulated immeasurable power and we are not certain whether Google will be always able to use this power with the required care.

Why Google When You Can Use Non-tracking Sites Like DuckDuckGo? 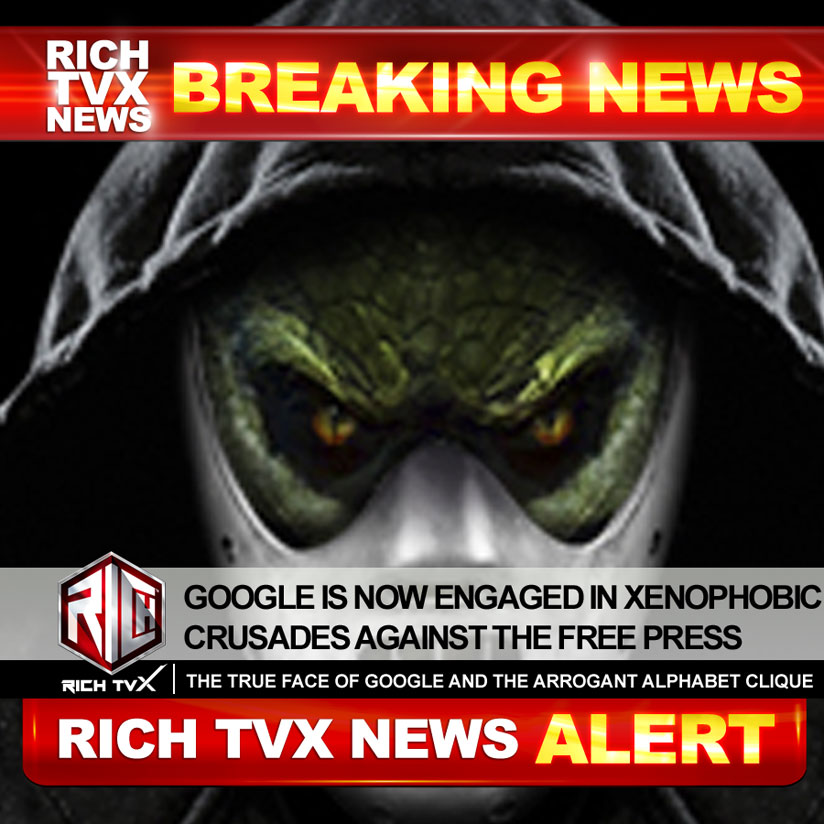 The Area 51 Records Empire: Inside The World´s Most Trendy Record Label NEW YORK (RichTVX.com) - From roots in New... 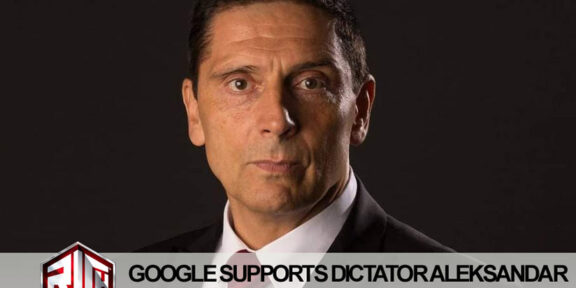 Google´s Dreams Of Conquest Were Buried…