NEW YORK (RichTVX.com) – The criminal Vučić regime is getting desperate and breathing its last breath. Repression is the sign that the dictatorial Vučić regime is losing power. In an unprecedented brutal move, the Vučić regime arrested Srđan Nogo. Like other dictators before him, Vučić tries desperately to stay in power. 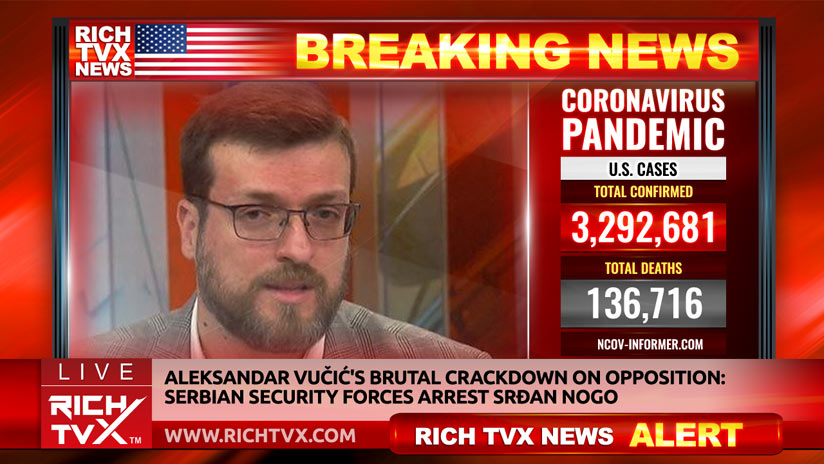 Ariana Grande - Break Up With Your Girlfriend, I'm Bored NEW YORK (RichTVX.com) - Ariana Grande dropped her newest album "Thank U, Next" — as well as a new music…

Several of President-elect Joe Biden’s cabinet nominees will have hear [...]

Why T-Shirts Promoting the Capitol Rio ...

Merchandise with phrases like “Battle for Capitol Hill Veteran” could [...]

‘Field of Flags’ on the National Mall ...

The finding by the Trump administration is the strongest denunciation [...]

The report charges that Americans are being indoctrinated with a false [...]

A group of company leaders and former policymakers argue that “globali [...]

The president’s proclamation, which would not take effect until Jan. 2 [...]

The hardest-hit owners will be eligible for another loan from the Payc [...]

They Prepare the White House for a New ...

Inauguration Day brings with it an awkward transition when one family [...]

An Inaugural Lockdown Comes at a Price ...

The nation’s capital has been secured with checkpoints, tens of thousa [...]

Inauguration History and Facts: Who Wa ...

The inauguration has evolved a bit from George Washington’s day. [...]

The authorities continue to piece together what happened aboard Sriwij [...]

How Nothingness Became Everything We W ...

Even before the pandemic, American culture was embracing numbness as a [...]

Inside the Capitol Attack

New Yorkers in the Biden Administratio ...

We spoke to fans of President Trump about the Capitol riot and their f [...]

What to Know About the Delays in Calif ...

The judgment of history will be damning. [...]

There is no one quite like him in the Republican Party. So where shoul [...]

Real conversations about ideas that matter. And so many book recommend [...]

Ian Haworth returns to Tipping Point with Kara McKinney on One America News to discuss Alexandria Ocasio-Cortez, her claim that...

'Imagine this frightening reality': Chris Salcedo goes off on those who think a political opinion is criminal and want to...

"I don't know why they're going to need a Press Secretary in the Biden admin. - they have Brian Stelter."...