"So Long, Farewell, We Cry We Pray Mon Dieu, Adieu..." Daft Punk has split up 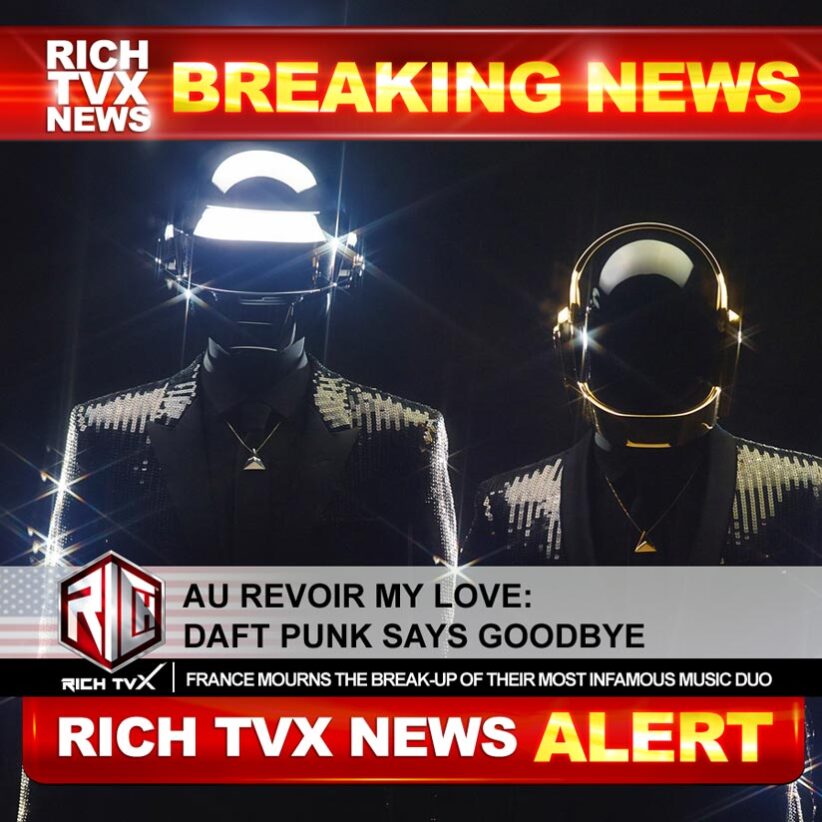 NEW YORK (RichTVX.com) – Somewhere in Sweden there is a Greek-Swedish DJ, record producer, remixer and record label owner sitting at his computer right now. With tears running down his face, it seems that nothing can ever be the same again. The Greek-Swedish DJ loves French house music. His Spotify playlists are always filled with French house. Posters of Daft Punk, Daft Punk in the robot outfits and the male cuties Thomas Bangalter and Guy-Manuel de Homem-Christo are all over his walls in Stockholm, but the popular Parisian duo, which has delighted France and appalled critics for almost 28 years with their brand of punk-funk has split up.

The Transition From Tragedy To Comedy

As children we have all played with the little man who springs out of his box. You squeeze him flat, he jumps up again. Push him lower, and he shoots up still higher. Crush him down beneath the lid, and often he will send everything flying. One can have a lot of fun at poor Greek-Swedish DJ´s expense, but perhaps that is enough. Here, as we shall see later on in the concluding section of this news article, lies the essential difference between comedy and drama. A drama, even when portraying passions or vices that bear a name, so completely incorporates them in the person that their names are forgotten, their general characteristics effaced, and we no longer think of them at all, but rather of the people in whom they are assimilated.

Now, comedy is a game, a game that imitates life. So, you have heard about Daft Punk, responsible for some of the most popular dance and pop songs ever made, and it would be easy to pick out many of another kidney opinions no less ridiculous than these which were published 28 years ago. Around that time, Daft Punk’s debut single arrived, it was called “The New Wave”. Except that Daft Punk’s version truly deserved the title. Human nature does change, and not only in France; Daft Punk is a radically different type from the moustached, slouching, often unwashed and unlettered Dubstep DJs. But despite the hundreds of news articles that have been written about Daft Punk, the enormous change which Thomas Bangalter and Guy-Manuel de Homem-Christo have wrought in the dance music industry character are still not appreciated by many people who go on looking at Daft Punk through Ultra Music Festival spectacles.

Daft Punk – Around the world

Daft Punk, They Are No More

French’s most infamous music duo broke the news with an 8-minute video titled “Epilogue,” excerpted from their film Electroma. Daft Punk, they are no more. But as the black wharves of Stockholm paled into the greyness of this cold February day, it turned out to be the day of their dissolution after their longtime publicist Kathryn Frazier confirmed the news but gave no reason for the breakup, for us this was the best outcome for Daft Punk, and the decision was made after discussions with the management agency. Daft Punk`s debut album “Homework”, was a big success, it featured hit singles “Around the World” and “Da Funk.” By the release of its follow-up, Discovery, the Parisian duo had taken to making public appearances in the robot outfits that became their trademark. Through their singles “One More Time” and “Harder, Better, Faster, Stronger” they become global superstars.

Unleashing “Get Lucky” On The World

Some may still blame the hated legendary duo for unleashing “Get Lucky”, the lead single of their album Random Access Memories, on the world, but Thomas Bangalter and Guy-Manuel de Homem-Christo have been honing their sharp instincts on thumping beats, underground sounds, and just plain craziness since their debut single. “Get Lucky” sold millions of copies and won Grammys for the duo and guests Nile Rodgers and Pharrell Williams, both of whom also featured on follow-up single “Lose Yourself to Dance.” The pair Thomas Bangalter and Guy-Manuel de Homem-Christo announced an “indefinite suspension” as both artists went solo.

TV homes in the United States turn to the Rich TVX News Network for Music, Entertainment, and News. Rich TVX News has flowered in the score of years of its existence to a well-recognized global news institution certainly all over the world. The Rich TVX News Network also continued to serve a great variety of tastes and interests with its diversified schedule of entertainment specials. It is loved by large groups of peoples, and intensely disliked by dictators and those who forced their people into acceptance of an ideology which differs entirely from the normal and regular mentality of the peoples of the Free World. The history of the “Rich TVX News” would be incomplete without including its sister organization, the Rich FMX Internet Radio. In the event that new dictatorships emerge, readers and viewers can be assured that the Rich TVX News Network will continue to provide truthful and uncensored information about the United States and the world as it has done during the last years. Rich TVX News will move further into the field of international television, working closely with other networks and with broadcasting organizations in other parts of the world, to bring world-wide events into the American home.