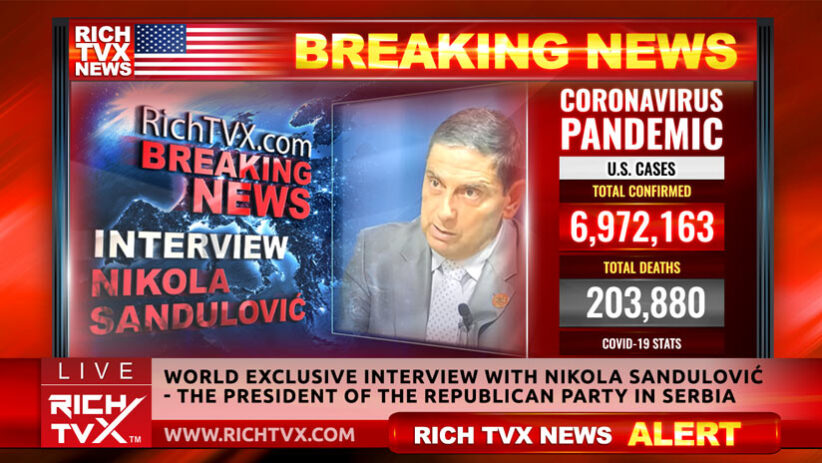 Part 2 of the World Exclusive Interview with Nikola Sandulović

Serbia’s current political regime resembles the (Slobodan) Milošević regime, in terms of pressure on the opposition. How long can the Vučić’s regime survive under the current situation, in your view?

I must state the harsh reality of the political situation in Serbia, and tell the world that the regime of Slobodan Milosevic was completely harmless comparing with the regime of Aleksandar Vucic!

I know it sounds unrealistic, but what Aleksandar Vucic is doing in Serbia, intimidating and robbing the Serbian people, beating, arresting and imprisoning, has nothing in common with civilized behaviour. Over and above he is destroying the economy, bringing migrants, Chinese, and representatives of militant organizations to Serbia while persecuting the opposition physical destruction. That shows all his communist radical past and the cruelty, shaped by Vojislav Seselj and Slobodan Milosevic. I can freely say that Aleksandar Vucic, a political monster, was jointly created by Slobodan Milosevic and Vojislav Seselj.

The very survival of Vučić’s regime is directly related to the political survival of Mrs. Angela Merkel, because she is in fact all the time his political mentor who gives him support and stimulus for such behaviour shaped by Stalinist methods.

The worst possible option for Serbia is that Aleksandar Vucic will survive, with all the force he uses, until the beginning of 2022 at the latest, when elections will be called at all levels. His earlier leaving can only happen if the United States and Mr. Donald Trump lose patience to continue to tolerate Aleksandar Vučić’s lies and criminal activities.

Has Mr Vučić been offered asylum?

To my knowledge, asylum has been offered to him by some African countries, as well as China. No any European country, neither Russia, nor America, has taken this into account to give him protection to escape and avoid responsibility for crimes and robbery.

I publicly promised to the Serbian people and the international community – Aleksandar Vučić must respond and be a future example that politics is not robbery, sadism, satanism, crime, but a responsibility, patriotism, economic stability and peace that should be achieved with clear political views and goals.

Will the Serbian state security apparatus be dismantled as part of transition period after Vučić?

I believe that no political structure, except the Republican Party, in Serbia is ready and not so anti-communist that it could and wanted to disband such a security service in Serbia, which we have so far. Unfortunately, none, because all the leaders of other so-called opposition structures and parties in Serbia actually came from those services and the communist cradle. All of them are, the same as their parents and their ancestors had been adherents of the System.

If the Republican Party and me will have the political possibility for such a decision, the old communist security apparatus that has existed in Serbia since 1945, until today, will be permanently disbanded! It is a source of evil, which has positioned Serbia as the last stronghold of communist thinking and action, making Serbia an unstable partner for possible future EU membership. I believe that the great responsibility of this security system is in the bloody disintegration of Yugoslavia, as well as that the same service is still interfering in political events in the region. I mean the events in Macedonia, Republika Srpska, Montenegro and Kosovo. Until this and such a security apparatus is disbanded, there will be no progress in Serbia, and there will be no peace or progress in the region. The disbandment of this and such a Service will finally bring down the last elements of instability on the Balkan region and Europe.

What kinds of thinking do you want to see going across Serbia in terms of changes?

Changes must occur first in the system itself and institutions. The present bureaucratic-communist system in Serbia is destructive for the individuals who want to develop economically. Communism in Serbia recognizes and supports only the rich politician, or the newly created rich ones as a product of the System for the Privileged. In every way it hinders every capable individual who wants to create for himself and not for them and with them. In Serbia, communist – capitalism rules are reserved for members of the Service and imposed politicians, not elected by the will of the citizens.

I want Serbia to live and think without fear. I want Serbia to start thinking about the future and not to live on the burden of the past. I want Serbia to think about the new future political and economic paths it needs to take.  Serbia should be connected to America, Great Britain and Israel, who can and want to make Serbia economically, technologically and militarily more advanced than have ever been. I want Serbia to be truly democratic and free country.

Thank you for the interview.

Pushed by Pandemic, Amazon Goes on a H ...

The dominant will thrive in this year’s holiday shopping. Everyone els [...]

A group of brands and retailers have been trying to reset expectations [...]

The coronavirus is not a shape shifter like the flu virus, but it coul [...]

Military’s Role in Vaccine to Be Stric ...

While no troops will be administering shots or dropping off doses, sco [...]

England’s Lockdown Will Lift, but Many ...

Some Conservative lawmakers are calling Boris Johnson’s plans to conti [...]

The justices issued six opinions, several of them unusually bitter, in [...]

‘Loser’: How a Lifelong Fear Bookended ...

The president’s inability to concede the election is the latest realit [...]

Taking questions from reporters for the first time since Election Day, [...]

Millions of people have been displaced by the pandemic. Jessika and he [...]

Pregnant Women Are Turned Away at the ...

The Trump administration’s restrictive immigration policies have not d [...]

The revival improves on the beloved, goofy original with a self-aware [...]

In the Face of Challenges,‘Thinking of ...

The pandemic has unmoored us from time. [...]

Surveillance as a Service

Jeff Bezos is intent on recording even our moods. How much personal da [...]

To come out of this pandemic better than we went in, we must let ourse [...]

In Praise of Janet Yellen the Economis ...

She never forgot that economics is about people. [...]