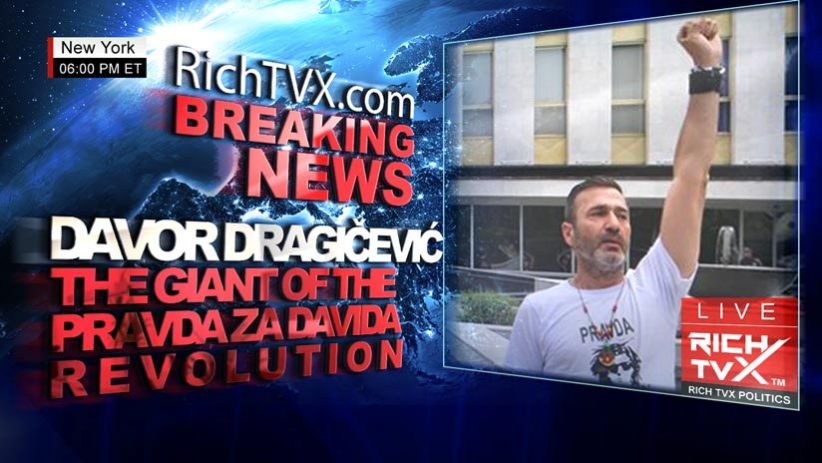 The authorities of the Republika Srpska are not telling the whole truth on the death of 21-year-old David Dragičević. But there are now thousands of protesters who every day, for over 160 days, have been asking for Justice for David (Pravda za Davida). David’s father, Davor Dragičević, is the most active figure of the protest. Davor Dragičević is “the first liberator of the 21st century,” the man who has became a symbol of Pravda Za Davida revolution in Banja Luka, the capital of Republic of Srpska, the Bosnian Serb state of Bosnia and Herzegovina.

NEW YORK / BANJA LUKA (RichTVX.com) – There are individuals who seem larger than life: Davor Dragičević is one of them. He is a civil activist and has became a symbol of the Pravda Za Davida movement, led by the principles of truth and justice. David Dragicevic’s death in March has triggered daily protests in Banja Luka for more than 160 days.

Truth and justice can be brought into this world, when a person is connected with the spirit, the essence of who he is. When Davor Dragičević speaks he resonates truth, he is an great example for the people in Republika Srpska, especially for the young generation. Davor Dragičević is “a giant for justice” whose “selfless struggle for Justice for David” inspires many people in the Republika Srpska and beyond.

Pravda za Davida (Justice for David) – the movement gathered together to find out the circumstances surrounding the murder of David Dragičević,  represents one of the most significant events in the history of Republika Srpska. Davor Dragičević is “the first liberator of the 21st century,” the man who has became a symbol of Pravda Za Davida revolution. Davor Dragičević makes us want to be a better person. Davor Dragičević speaks to what’s best inside of us.

Davor Dragičević raises his fist, and shouts “Pravda Za Davida” across the central square of Banja Luka, and every time, it´s echoed by thousands of supporters. Republika Srpska – a nation at the crossroads, as the end of Republika Srpska’s Dodik era is coming closer. General elections will be held on 7 October 2018.

As Cases Overwhelm the U.S., Officials ...

Health officials are acknowledging that contact tracing can no longer [...]

The picks are a repudiation of President Trump’s isolationism, but the [...]

Biden Transition Gets Underway as Team ...

Within hours of the Trump administration’s decision to stop blocking t [...]

From trade and sanctions to tax policy and financial regulation, the f [...]

Ivanka and Jared Look for a New Beginn ...

The end of President Trump’s time in office leaves his daughter Ivanka [...]

Even in the absence of a questionable outcome or any evidence of fraud [...]

Trump Is Said to Plan Pardon of Flynn

The Truth About Thanksgiving Alone in ...

In a city where the holiday has special significance, a ban on gatheri [...]

Tiny is the new big this holiday season, and making a small meal can b [...]

Holiday dishes don’t need to be fussy. Keep the shopping and cooking s [...]

Take a look back at the show with the creator Amy Sherman-Palladino an [...]

How to Pretend You’re in Hawaii Tonigh ...

With a few easy-to-find items, you can discover the archipelago’s brea [...]

A father photographs his family life during the coronavirus crisis. [...]

Prominent leaders said he was a somewhat reluctant trailblazer who too [...]

A Failed Attempt to Overturn the Elect ...

The Trump administration has authorized formal preparations for the tr [...]

Many Americans’ feeds are nightmares. I know because I spent weeks liv [...]

Happy Thanksgiving to All Those Who To ...

Civil servants, elected officials and judges did their jobs and protec [...]

Should Trump Be Prosecuted?

Being president should mean you are more accountable, not less, to the [...]

Why Is Congress Still Discussing Hydro ...

There is no evidence that hydroxychloroquine helps Covid-19 patients. [...]

The Truth That Iraq and Afghanistan Ve ...